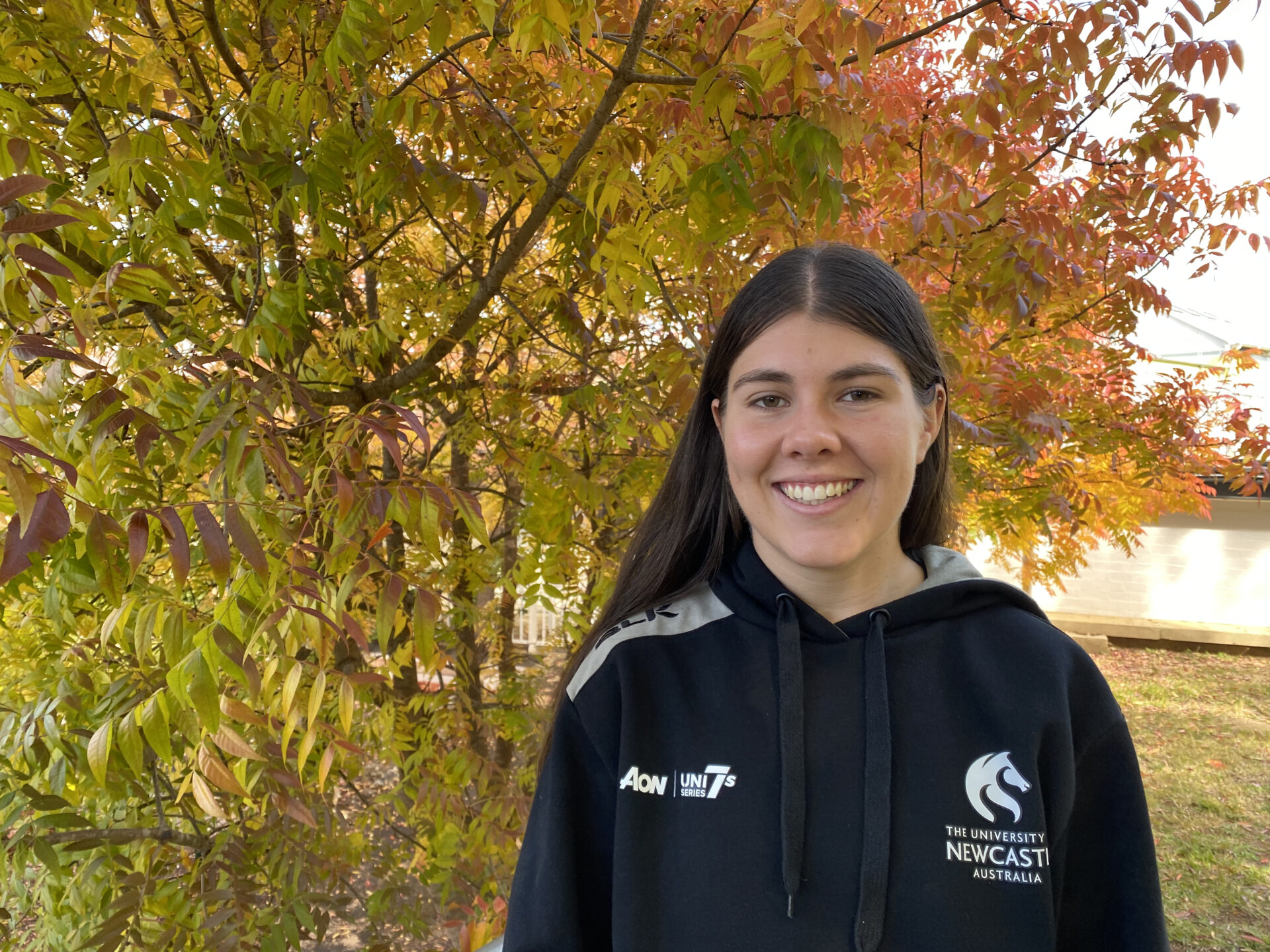 Before UNE Sports Academy student Clare Harpley drifts off to sleep at night, her mind slips into a transient state where her thoughts are occupied with rugby – she might be analysing her performance from the last game, or imagining various plays and structure, but most importantly, she’ll recognise what she can improve next game.

Although Clare has only been playing rugby for a little over four years – her acceleration into representative rugby can be attributed to her focus on self-improvement and her love for the sport.

“For as long as I could remember, I just wanted to be like all the boys – running around on a footy field,” Clare said.

“It was a defining moment for me when the Australian Rugby 7’s women team won gold at the Rio Olympics because it showed me that you can make it to the big time as a female in rugby.”

Clare’s journey with rugby began with Viva 7’s, “It all started with me playing touch rugby for the Tumut Bullants in 2016. Back then, there weren’t many schoolgirl rugby teams and so touch rugby was as close as I could get.”

Fast forward a year and female rugby participation was beginning to boom in Canberra – the closest major city to Clare’s hometown of Coolac.

In 2018, The Sydney Morning Herald published an article about a 40 percent growth in participation for girls between 13 and 17 years old and highlighted the development of women’s rugby and the pathway young girls have in rising to the top.

That same year Clare trialled for the Brumbies ACT rugby 15’s schoolgirl side and was selected for the team for two consecutive years in 2018 and 2019.

“Dad had encouraged me to trial for the Brumbies Schoolgirls, and I was overjoyed when I found out I had been selected.”

The school-aged program Clare had been selected for provides young athletes the opportunity to experience the training, preparation, and competition of high-level rugby union alongside some of the best up-and-coming rugby talent.

During Clare’s gap year in 2020, she was called up late and was offered to train with the Brumbies Women’s side and represented ACT in a trial game against the Melbourne Rebels.

The Brumbies Rugby Union team represents the ACT, and the Far South Coast and Southern Inland regions of New South Wales in the Super Rugby competition.

“It was a pretty cool gap year come to think of it. During that year I worked on the family farm, I’d travel to Canberra two to three times a week to train with the Brumbies, with the aim to develop as a player, whilst also playing club rugby for the Wagga Agricultural College.

“I was one of the younger players in the Brumbies squad, however learned a lot over the program. It was a special opportunity to train next to some of our best female rugby players.”

Clare is now in her first year studying a Bachelor of Business/Bachelor of Agriculture at UNE, and playing rugby for St Alberts in the Armidale 7’s rugby comp. On a representative level, Clare was involved with the University of Newcastle in the Aon Women’s Uni 7s 2021 season, a tournament for senior female 7s players from university representative teams by Rugby Australia.

“When I came to Armidale to study at UNE I wanted to keep playing rugby at a high level, and so I trialled for Newcastle’s team and was selected. I was playing in the development team for Newcastle, but having Australian 7 stars in your team was unbelievable. Watching athletes like Charlotte Caslick – an idol of mine – is something I’ll cherish for a long time.”

Being given the opportunity to play representative rugby with Olympic idols is one thing, but beginning a full-time double degree is another. When it comes to balancing it all, Clare has the UNE Sports Academy to support her when one commitment begins to outweigh the other.

“The free access to the Sport UNE gym has been amazing for the short time I have been with the UNE Sports Academy! I go there three times a week in the morning,” Clare said.

“On the study side of things, Sports Academy has been an incredible support network for me. I recently reached out to them when I was struggling with my full-time study load whilst having to travel regularly for sport. They advised me to drop to three units and I’m so glad I did, it was the best decision.”

When Clare isn’t thinking about rugby, she would one day like to be involved in the family business. Clare comes from a farm at Coolac, NSW. Her decision to study a double degree in business and agriculture was so she could take her knowledge into the agricultural industry.

“When I had finished school, Dad and I sat down and looked at all the relevant courses I could study and found that UNE’s undergraduate Ag/Bus degree as the standout.”

Like many student-athletes at UNE, Clare has a set routine that helps her balance her different commitments.

“I like to get up early and go to the gym and then study the majority of the day, and then play football at night. It’s a routine that I stick to – no excuse,” Clare said.

“I rarely stray from my routine, even if I were to go out one night, I’ll be up the next morning at 6am and back into my training. It’s all about discipline. You’ve got to be in it to keep improving and get yourself to that next level. My commitment to study and footy is for my future.”

We’d like to thank Clare for taking the time to speak with us today! Her dedication to her sport and study is beyond admirable, and we can’t wait to see what’s next for this bright athlete!

UNE Sports Academy was established in 2018 as a high-performance pathway for competitive athletes choosing to complete their studies at UNE. The Academy assists student-athletes to balance their studies whilst meeting the high demands of representative level sport.